Potatriots: When the US Government Brought Potatoes and US History Together

by Roberto Baldwin on November 2, 2019 in Photo 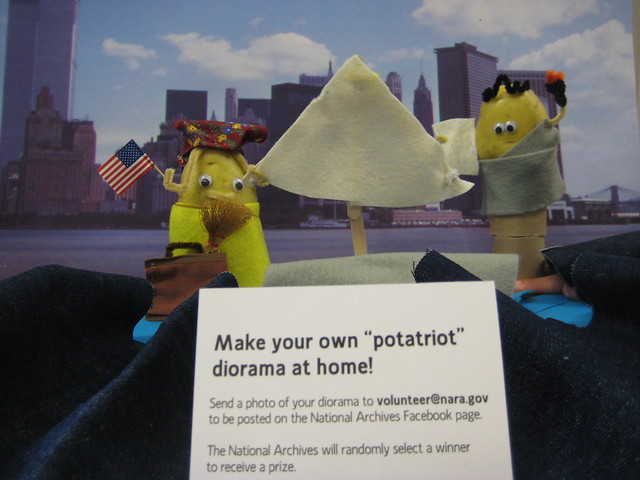 In July of 2011, the National Archives had a unusual idea. Why not create a series of historical dioramas with potatoes as the main characters then ask the public to create their own scenes and share them with the organization. The fine folks protecting the nation’s history would then post those submitted images and pick a winner.

The inspiration for the 2011 spud scenes was the above photo from 1917. Apparently, folks were told to eat potatoes to support our troops during WWI (Fuck the kaiser! Eat mashed taters!). “Spud the Kaiser” is a weird battle cry, but what do I know.

Well, from the looks of the organization’s Facebook page, the user-submitted gallery never happened (or it did and was removed. I’m too lazy to delve into the underbelly of the tater-truther Reddit thread) and I’m not sure anyone won a prize for their image. Maybe no one participated? Maybe the submissions were too hot for the social page of a government agency’s social feed?

The photos on Flickr seem to be a combination of scenes created by volunteers and children. Some are quaint, but one. Well, it’s weird and probably in bad taste.

The Salem Witch Trials diorama is an odd choice. Not only did someone have to say this is a good idea, but they also photographed it and placed it in the archives. Because nothing soothes injustice against women like carbs dressed up as humans with pipe-cleaner flames bringing about the worst possible way to die.

But is that enough reason to let this idea wither away like that potato that fell behind your fridge? Of course not, share your own Potatriots with our Twitter feed.